Image: Overview of the 7 buildings and park of the project

Arnhem has opted to take a (partially) hands-off approach to the management of district development in the eastern part of the Coehoorn area. On 25 March 2013 Arnhem’s municipal council voted with an overwhelming majority of 32 votes (out of 37) in favour of a motion by the parties GroenLinks, VVD, SP and D66 to release the Coehoorn area for alternative development as a ‘creative’ district.

The project in a nutshell
Arnhem has a strong creative profile, in the field of cultural events and entrepreneurship. There is a real buzz about the city in all areas and a new generation has emerged that is keen to shape Arnhem in a dynamic way.  The city has recognized that these creators need to be given the freedom to do what can no longer be achieved through policy documents and major investments alone. The project is an not4profit initiative of Paul de Bruijn (Urban Inspiration) and Peter Groot (H2A Studio).

Creative community
Coehoorn is a community of some 80 (starting) creative entrepreneurs. The project offers the city an opportunity to demonstrate its creative diversity, to engage in mutual interaction and to be more than the sum of its parts. With ArtEZ no other city in the Netherlands has an academy for creative and artistic professions offering so many creative disciplines. There is a wide range of creative courses available at senior secondary vocational education (MBO) level. Arnhem also boasts a university of applied sciences de Hogeschool van Arnhem en Nijmegen offering a broad range of study programmes. A productive ‘ecosystem’ will help the city to translate this wealth of skills into new, innovative, creative activity. Ultimately, this will create a stronger economic base for the city as a whole.

District regeneration
In Coehoorn area new knowledge is being gathered on new forms of district regeneration within an urban environment. ‘Filling’ vacant properties is a secondary objective here. The primary objective of our initiative is to breathe new life into districts. Residents should feel that they not only live in a district, but are also involved in shaping it – step by step. Coehoorn also demonstrates that a district in which a number of different urban functions strengthen each other is a more attractive urban environment. In a vibrant district life, work and recreation go hand in hand.
The project was granted a 5-year periode to exploit its chances until september 2018. This periode of time has passed as the municipality wished for the initiative to stay and develop further into a total redesign of the designated area. The municipality considered is necessary that the buildings used by our project were no longer let by them, but would be bought by the entrepreneurs. The buildings after being sold have a defined use as studio to (starting) creative entrepreneurship.

Creative entrepreneurial climate
Coehoorn attracts creatives from the city and beyond. A daring creative and entrepreneurial climate encourages graduates from Arnhem’s educational institutions to stay in the city for a longer period of time. Coehoorn – and therefore Arnhem – is a place that gives them the freedom they are looking for. Many creatives are aware that ‘Arnhem’ is already a ‘brand’ in the Netherlands in creative circles. Coehoorn must further reinforce this by giving this ‘brand’ a permanent platform. ‘A golden future lies in store for Arnhem’, according to Herman Kaiser, the former city’s mayor.

Randstad and Nordrhein-Westfalen
The nearby ICE high-speed rail service linking the city to the Randstad region in the west of the Netherlands and Germany’s Ruhr region, part of Nordrhein-Westfalen. The capital is the thriving, art-and-design-loving city of Düsseldorf, a city offers Arnhem – with Coehoorn a creative springboard – an opportunity to convert its creativity into economic value. From Coehoorn we establish links with our German neighbours, and invited them to Arnhem in return, to learn, inspire and work together.

Coehoorn gives you freedom
In Coehoorn the business community, public servants and young creatives come together in an informal setting and engage in open forms of collaboration. You can be engaged in experiments in Coehoorn. In Arnhem you can create your product – and you can sell it from here too.

More about the project on use.metropolitan.org. 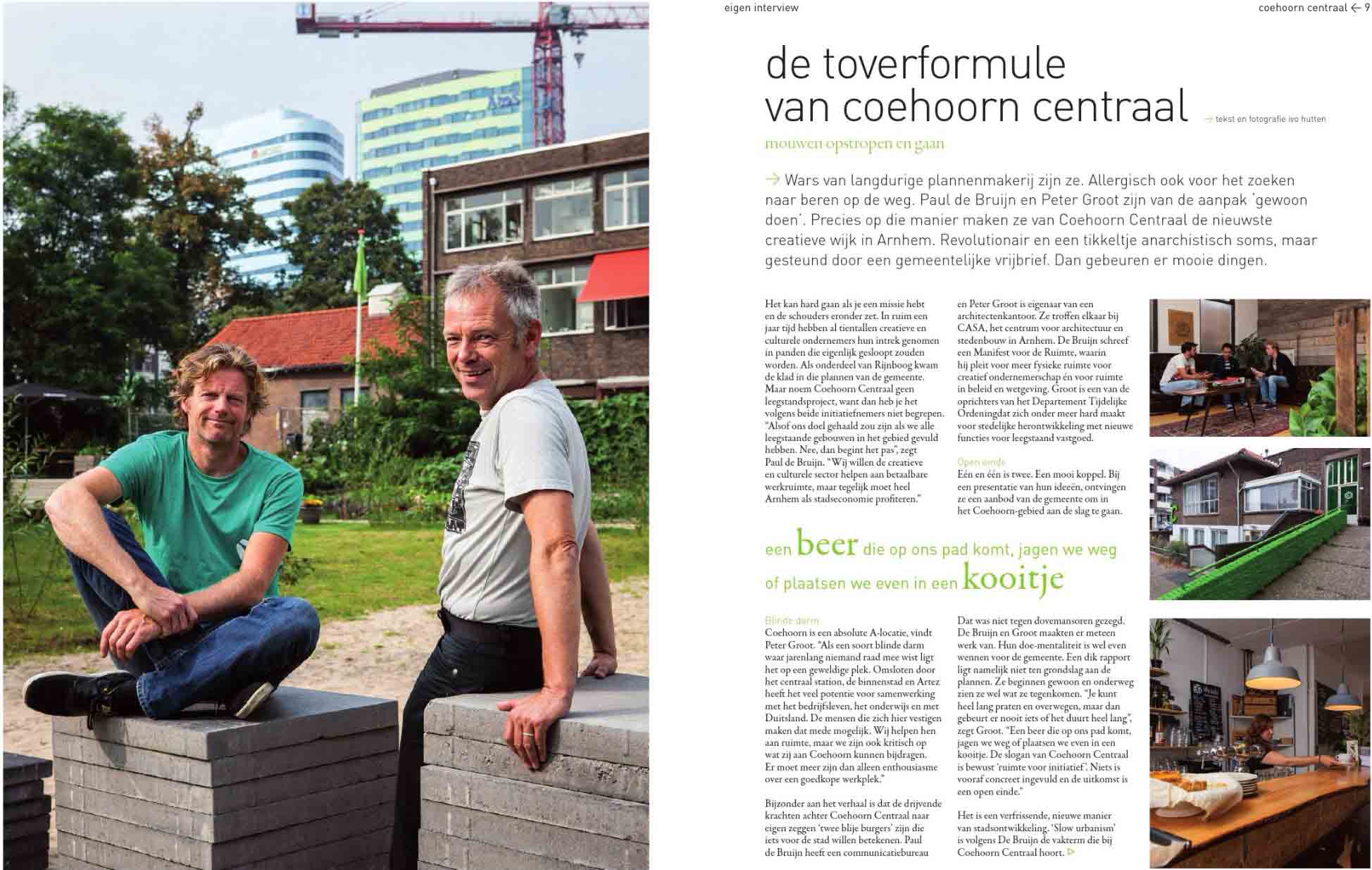